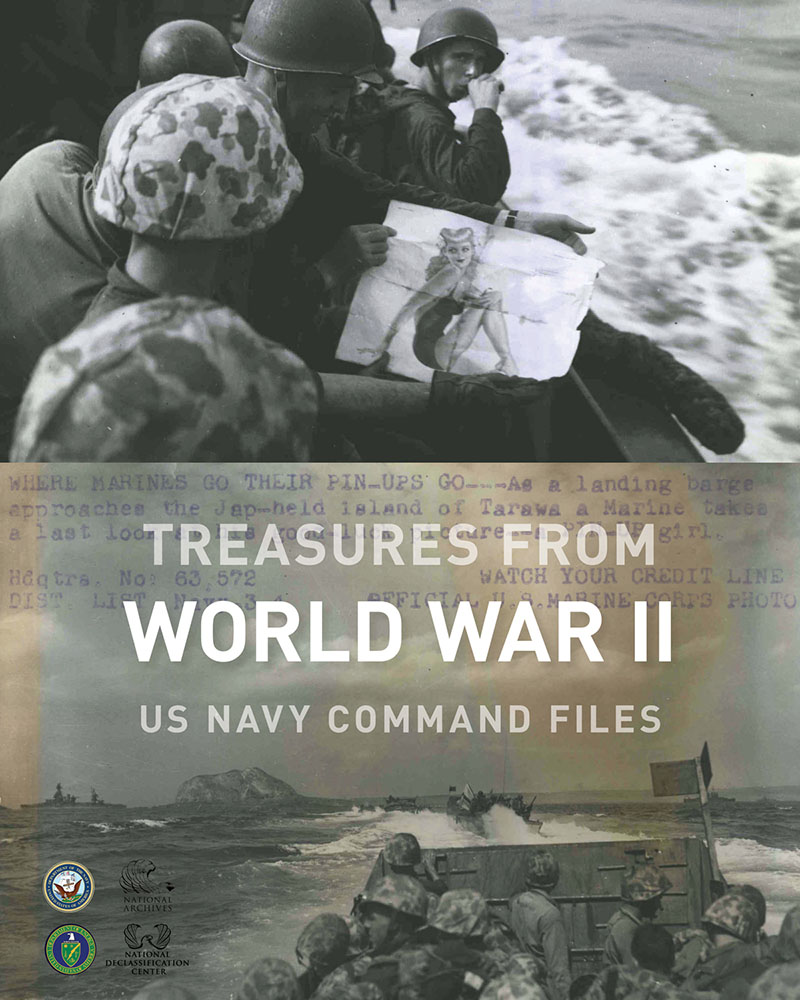 The National Declassification Center (NDC) at the National Archives and Records Administration (NARA) recently released 192,500 pages of formerly classified U.S. Navy Command Files from the World War II era. The Treasures from World War II US Navy Command Files consist primarily of records from the Pacific Theater. Most of the records date between 1941 and 1946. Some records, however, date as far back as 1917 and some up to 1967.

This collection of records was created by the Office of Naval Records and Library from various Naval components in an effort to convey one of many military experiences during World War II. These records also include some materials created by and about the United States Marine Corps.

These records are arranged by subject, and a subject matter list is available for each box. All records have been declassified, and are fully available for researchers. 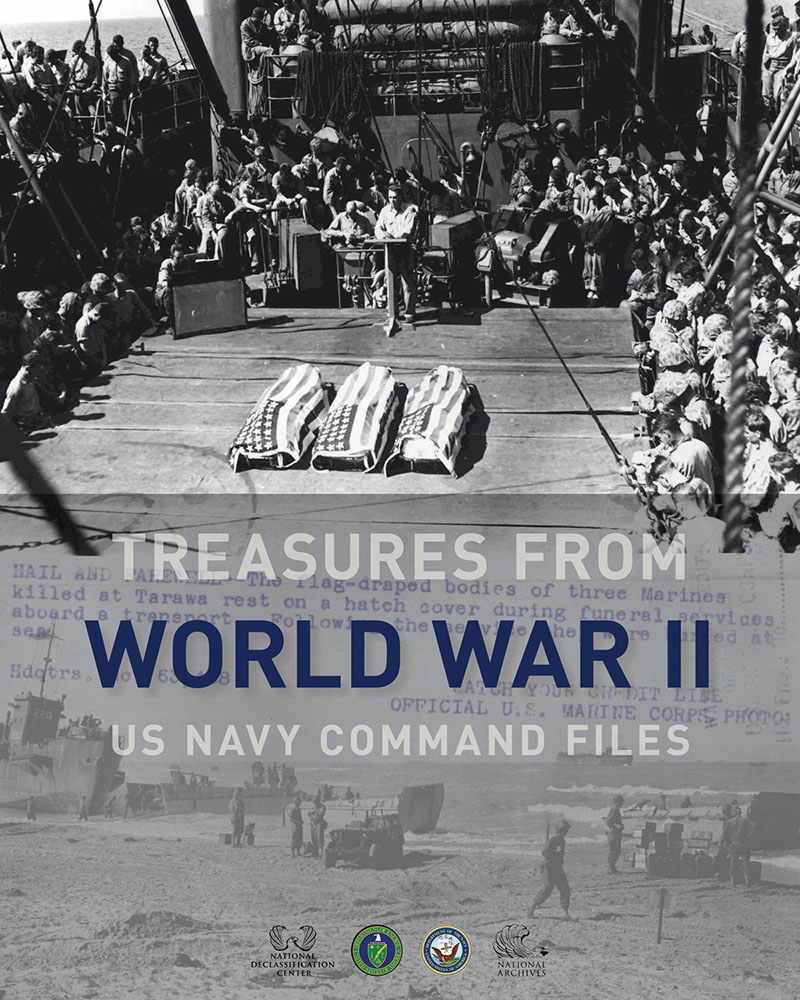 The topics covered by these records are vast and varied. Subjects include: Naval intelligence, combat operations, the investigation into the Pearl Harbor attack, operational planning, submarine and anti-submarine warfare, ships' combat damage control (to include material dealing with the battle damage to US Naval vessels broken down by year), escort operations, and Naval administration. Amphibious warfare operations covered include the invasion of North Africa, Sicily, and Northern France in the Mediterranean and European Theaters; the Solomon Islands, Gilberts Islands, Marshall Islands, Mariana Islands (Saipan, Guam, & Tinian), the Philippines, Iwo Jima, and Okinawa in the Pacific Theater; as well as the battles of Wake, Coral Sea, and Midway in the Pacific Ocean.

Additional subjects include mine warfare, post mortems of enemy submarines, and the defense against Japanese aerial suicide attacks on U.S. Naval vessels. Moreover, there are reports on various actions and campaigns, numerous unit histories, and ships’ war diaries. Histories involve those for various Naval aviation squadrons; as well as ship histories for vessels such as the USS Saratoga, the USS Ticonderoga, the USS Yorktown, and the USS Franklin. Some histories document World War II submarine operations, as well as the Naval administration of the war. Furthermore, letters for award commendations and citations, as well as letters of condolences, are included. Also covered is a Joint Army-Navy Intelligence study of the Philippines.

For three of the vessels, the USS Enterprise, the USS Yorktown, and the USS Franklin, documents reveal the daily activities of the ships and the sailors. The deck logs (1942 – 1945) from the USS Enterprise indicate the changing activities of the ship. The history of the USS Yorktown contains information about where she fought, sketches of her commanding officers, as well as ship and air group casualties. In contrast to this, the records of the USS Franklin reveal the sailors lives on the ship through their promotions, demotions, discipline, courts-martial, awards, staff transfers, and deaths.

These three aircraft carriers significantly contributed to the war effort in the Pacific Theater. They participated in major battles in the effort to defeat the Japanese Empire. The USS Enterprise, referred to as the "Big E," was damaged several times, but survived the war. She was scrapped in 1960. The USS Yorktown was badly damaged at the Battle of Midway in 1942, and sank. A successor USS Yorktown was built, fought in the Pacific area and was sometimes called the "Fighting Lady", later became a museum in South Carolina in 1975. The USS Franklin, nicknamed "Big Ben," was badly damaged during several battles, but survived the war. This carrier was sold for scrap in 1966.

Of interest to military historians are the strategical and tactical analysis of such battles as the Coral Sea, Midway, Savo Island, and Leyte Gulf. Significant topics include a history of US Naval bases in the United Kingdom, and the US Navy search for German scientific and technological advances for the benefit of the Navy Department, as well as the history of underwater demolition teams.

Diverse subjects include the organization of the USS Enterprise, PT (Patrol Torpedo) boats (as well as a small amount of information about President John F. Kennedy's PT 109), and CINCPAC (Commander in Chief, Pacific Command) Headquarters. Accompanying the findings on the Pearl Harbor Navy Court of Inquiry is the profound statement by President Harry S. Truman on the conclusions of the court.

Some of the most interesting records may be the photograph albums of various Pacific Ocean World War II battles. Those battles include Tarawa, Marshall Islands, Mariana Islands (Saipan, Tinian, & Guam), Peleliu, and Iwo Jima.

For some researchers, the terrain studies may be of interest. These studies analyze the land use on various islands in the southwest Pacific area. It is quite surprising the depth of analysis these reports turn out to reveal.

If you have an interest in World War II or the United States Navy, then the Treasures from the World War II US Navy Command Files await exploration. These records are worth your time and your effort to investigate, to study, and to learn.