Search in the National Archives Catalog for all Philippine Archives Collection descriptions.

A review of military operations in the Pacific provides context for appreciating the origin, arrangement, and condition of the records. The Philippine Archives Collection, created to document military operations and individual participation in the war, is a valuable source of information about the war and about the people who engaged in wartime activities. 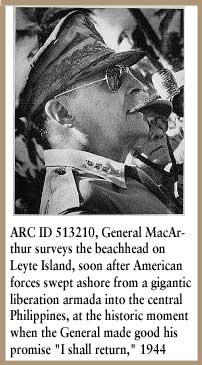 Some records in the collection predate the invasion period by almost a decade, while other records date nearly 30 years into the postwar era. The collection spans 48 years – 1930-1978. This date span, however, should not be interpreted to mean that the collection holds significant records of the pre-invasion and postwar periods; the primary focus of the collection are the experiences of men and women who participated in the action on the Philippine Islands from the time of the Japanese invasion in December 1941 to the end of World War II.