First introduced in Congress in 1878, a woman suffrage amendment was continuously proposed for the next 41 years until it passed both houses of Congress in 1919 and was ratified by the states in 1920. The campaign for woman suffrage was long, difficult, and sometimes dramatic, yet ratification did not ensure full enfranchisement. Many women remained unable to vote long into the 20th century because of discriminatory laws. 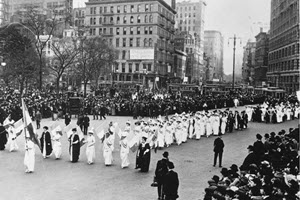 Explore photographs, textual, and other records related to suffrage in the National Archives Catalog.

Explore teaching and learning resources for the Women's Suffrage, including primary sources, online tools, lesson plans, and multimedia on DocsTeach.org, our online tool for teaching with documents.

Research at the National Archives: Suffrage

While many resources are available online for research, there are many more records to discover in National Archives’ research rooms across the country. The following records have been described at the Series and File Unit level, but have not yet been digitized. This list is not exhaustive; please consult our Catalog to browse more records, and contact the Reference Unit listed in each description for more information.

Articles, Blog Posts, and Other Resources: