The National Archives houses passenger manifests from vessels arriving to the United States from foreign ports between approximately 1820 and the mid-twentieth century. The records are arranged by the port of arrival.

Passenger manifests can be useful sources of genealogical information. However, genealogists sometimes find that their ancestor's name is crossed off of a passenger manifest. There are several reasons why this happened:

1) The individual might have booked passage aboard a vessel but ultimately did not sail with that vessel.

The individual may have become ill and could not travel, or they may have missed the ship’s departure. Whatever the reason, the change in the individual’s plans sometimes occurred too late for officials to amend the passenger list before departure. Officials instead crossed the individual off of the passenger list and usually included “N.O.B.” (“Not on Board”), “did not sail,” “not shipped,” or another notation in the left margin of the manifest.

2) The individual may have been aboard a vessel but were listed more than once on the vessel’s manifest.

Officials would often cross off duplicate entries, leaving one “official” passenger record for each individual to avoid confusion. Browsing the entire manifest for a particular vessel’s voyage can help identify an individual’s official entry and potential duplicates.

3) The individual did not disembark from the vessel at the port where the passenger lists were submitted.

This may have been the case if a vessel stopped at multiple ports. If an individual did not disembark at the first port of arrival, their name might be crossed off the passenger list for that particular port. However, their name might appear (and not be crossed off) in the passenger list for another port that the vessel visited. Researching vessel histories and voyages can help trace individuals’ potential ports of arrival, if you also know the approximate date that the individual entered the United States.

She appears on line 14 of the vessel's "List of United States Citizens," but her entry is crossed off. An annotation to her entry indicates "Tsfd [Transferred] to alien sheet 1 line 8."

The cross-reference is to the vessel's "List or Manifest of Alien Passengers for the United States Immigration Officer at Port of Arrival," a two-page record. Marie's entry on line 8 of this sheet indicates that she was "admitted as alien for permanent residence. . . Tsfd [Transferred] from citizen sheet. Sheet #3 line #14."

This suggests that Marie was mistakenly included on the citizen manifest and that her entry was crossed off once she was added to the noncitizen manifest. 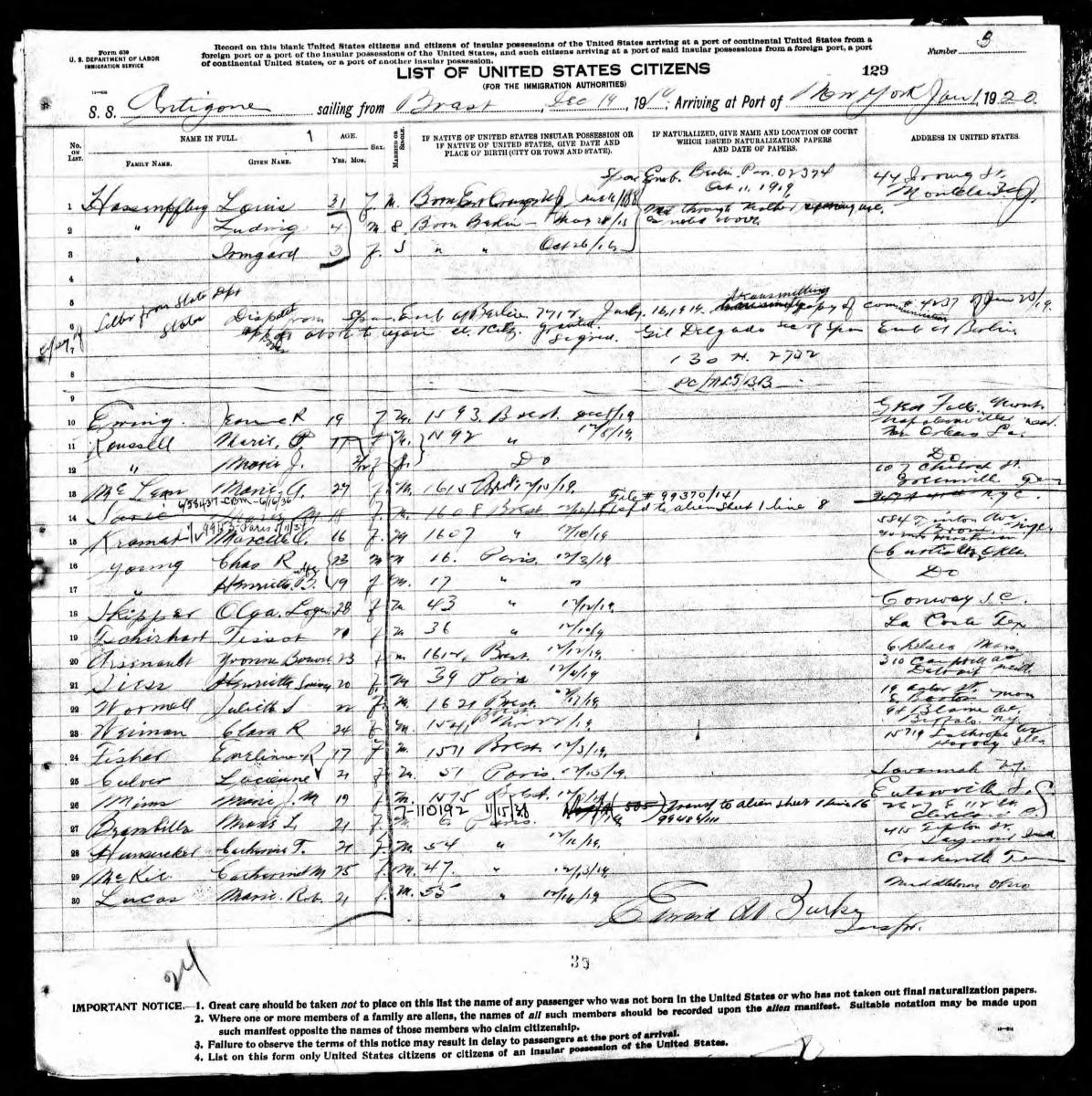 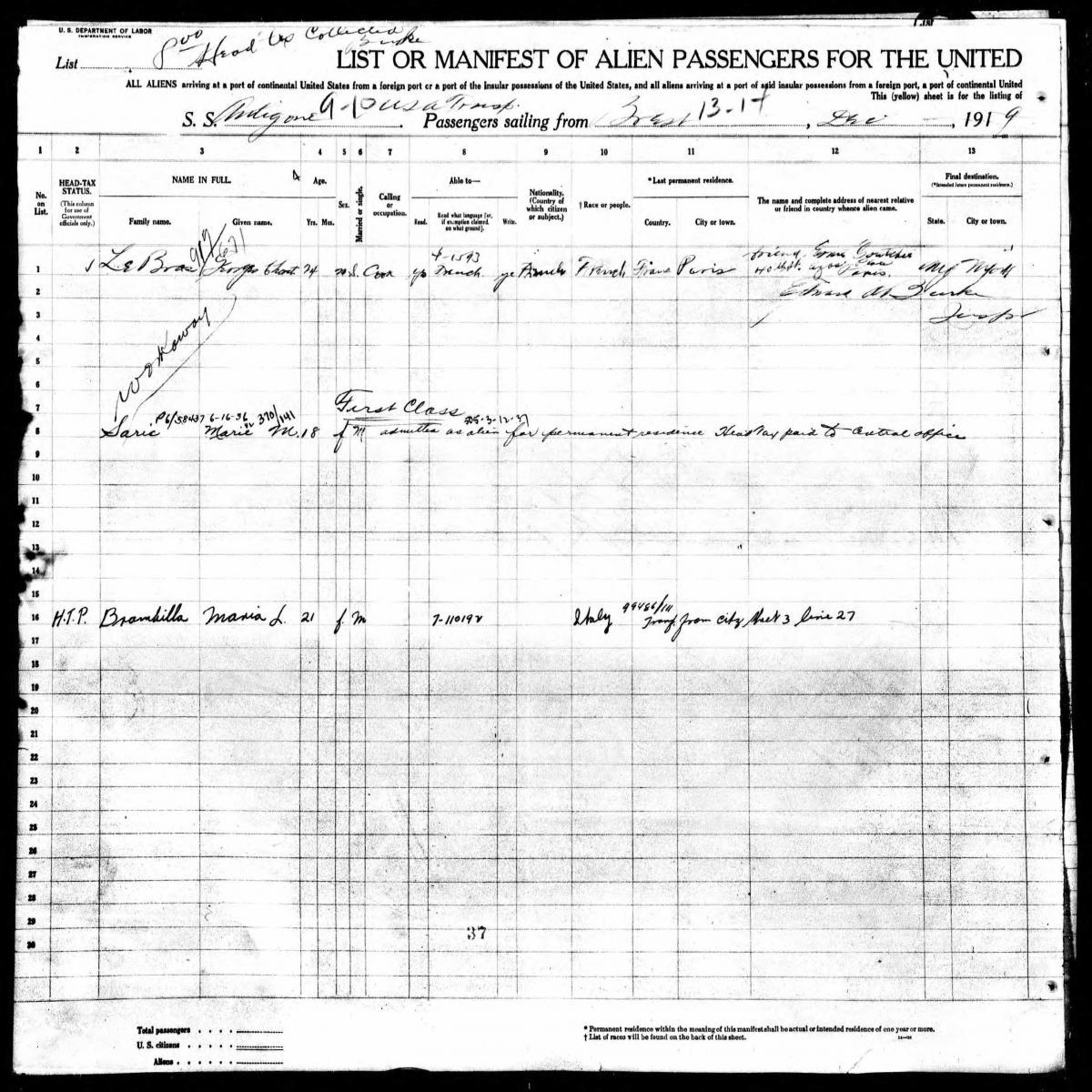 Page 1 of S.S. Antigone's "List or Manifest of Alien Passengers" 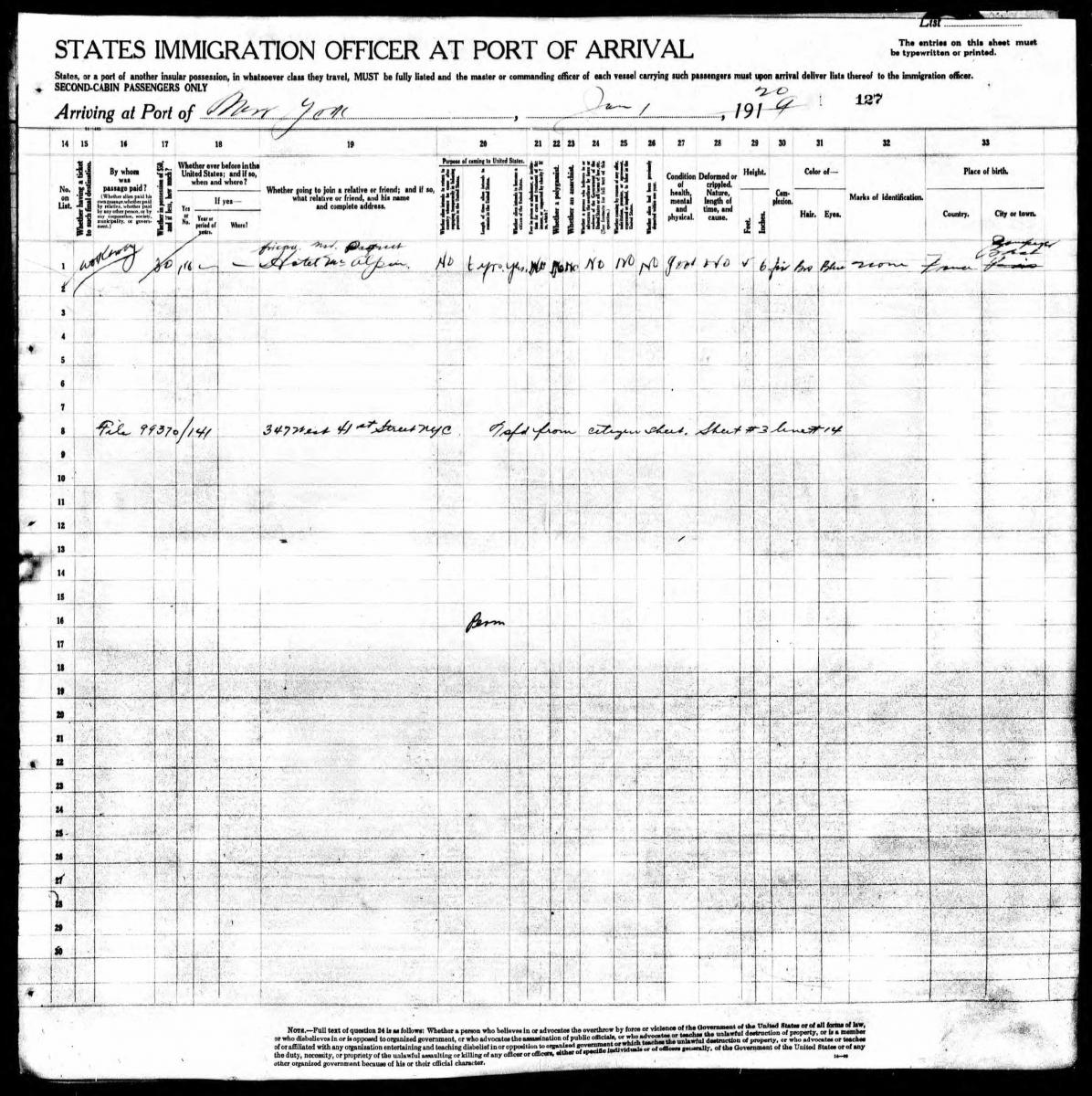 Page 2 of the S.S. Antigone's "List or Manifest of Alien Passengers"

For general information on passenger arrival records at the National Archives, please see: