Records discussed in this chapter:

21.1 The term "executive proceedings" refers to the activities of the Senate in confirmation of Presidential nominees and in approval of treaties—activities in which the Senate shares responsibility with the executive branch. Sessions of the Senate to consider executive business were traditionally held behind closed doors, although the Senate often removed the "injunction of secrecy" placed on these proceedings if a treaty or nomination was of special interest. The rule calling for secrecy (Senate Rule XXXVI) was not actually repealed, however, until 1929. 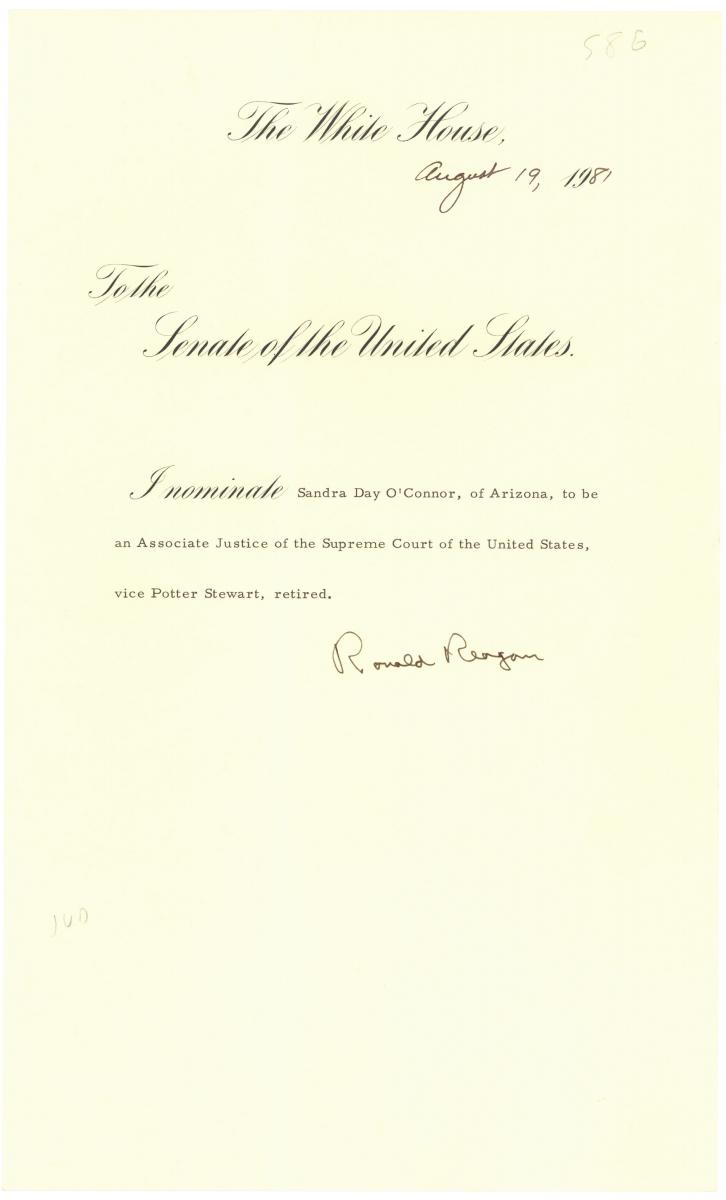 Nomination of Sandra Day O'Connor as a Supreme Court Justice on August 19, 1981. RG 46, Records of the U.S. Senate, National Archives.

21.2 Nomination messages and related papers, 1789-1946 (268 ft.), are arranged by Congress and thereunder chronologically (the messages) and alphabetically (the related papers). After 1946 the related papers are filed with the records of the committees considering the nominations and are described in this guide with other committee records. The messages continue as a separately filed series as maintained by the Senate Executive Clerk, 1947-68 (19 ft.).

21.3 The messages are generally of interest only to the person being nominated or as possible items for exhibit, with their text typically reading, "I nominate John Smith to be Secretary of the Treasury, in place of William Jones, resigned," followed by the President's signature. Promotions of military and foreign service officers are usually grouped together so that some nomination messages are several dozen pages long. The series of messages is complete from the First Congress although individual documents are sometimes missing.

21.4 The papers related to nominations consist mainly of letters of recommendation or opposition from private persons and Members of Congress and in some cases include letters from officials of executive departments. Sometimes transcripts of hearings may be found. There are many nominees for whom there are no papers, indicating either the lack of controversy over the choice or the loss of the records. The 19th-century records related predominantly to appointments to offices of a local or regional nature, such as postmasterships and Federal judgeships, which became the subject of local controversy. Political rivalry between parties and between factions of a party is often reflected in these records. A National Archives publication, Special List 20, lists all the individuals for whom papers are present from 1789 through 1901, and an unpublished compilation is available that continues this list through 1946.

Message of President John F. Kennedy transmitting a treaty signed at Moscow on August 5, 1963, banning all nuclear weapons tests in the atmosphere, in outer space, and under water. RG 46, Records of the U.S. Senate, National Archives.

21.5 Records relating to treaties with foreign countries, 1789-1968 (88 ft.), are filed as a separate group of records, although they are really records received or created by the Foreign Relations Committee. The treaty records are arranged alphabetically by name of country for each Congress. Multilateral treaties are grouped separately.

21.6 A treaty file will usually contain the original Presidential message transmitting the treaty in addition to copies of the diplomatic correspondence relating to the negotiation of the treaty and a copy of the treaty itself. There will often be a printed copy of all of this material, "printed in confidence for the use of the Senate." The original treaty signed by the diplomatic representatives is not sent to the Senate but remains with the Department of State.

21.7 The treaty records of the Senate before the 20th century largely duplicate the records of the State Department and contain few papers unique to the Senate. Some correspondence and petitions are in the file on the treaty of arbitration with Great Britain signed in 1897 (55B-B4). The records of the Treaty of Versailles with Germany, 1919 (2 ft.), include tally sheets of committee votes, shorthand notes of minutes of committee meetings, copies of proposed reservations, and printed hearings (66B-B5). Roughly from the time of World War II, correspondence between the committee and the State Department is present, as well as analyses prepared by the Foreign Relations Committee staff.

21.8 Treaties remain with the Senate until they are ratified or withdrawn and the records on a given treaty may be found in the records of a Congress later than the one during which it was originally submitted. The treaty series for the 80th Congress (1947-48), for example, contains the files, some of them extensive, of a number of treaties originally sent to the Senate in the 1930's and never ratified. Included are records of an unratified 1934 St. Lawrence seaway treaty (80B-B4) and an international copyright convention of the same year (80B-B28).

21.9 From the earliest days of the government under the Constitution, the United States conducted relations with American Indian tribes by making treaties with them, continuing the practice of the Confederation and colonial governments from the earliest days of English settlement. These treaties often involved establishment of boundary lines, provisions to regulate trade, and land cessions by the Indians to the United States in exchange for a money payment or other lands in unsettled parts of the country. Treaty making with Indian tribes came under increasing attack after the Civil War as white settlement in the West increased and it became clear that it would never be possible to separate the Indian tribes entirely from the rest of the country. A provision of the Indian Appropriation Act of March 3, 1871 (16 Stat. 544), prohibited further treaties with the Indians but guaranteed the continued validity of those already in force.

21.10 Treaties with the Indian "domestic dependent nations" were considered to have the same legal status as those with foreign countries and Senate approval was needed for their ratification. There is, therefore, a series of records relating to treaties with Indian tribes, 1789-1871 (18 ft.). These records are arranged by Congress and thereunder chronologically by date of submission. There is an unpublished list of these treaties available for use by researchers.

21.11 The content of the Indian treaty files is similar to that of the foreign treaty series for the same period. The original Presidential message transmitting the treaty is usually present along with letters from officials of the Bureau of Indian Affairs, the agency responsible for negotiating treaties with the Indian tribes. The Senate records on Indian treaties are therefore to a large extent duplicated in the records of that bureau, which was a part of the War Department until 1849, when it was transferred to the Department of the Interior. Additional correspondence may be found in the Senate files, but this is not generally the case. See treaty files of the Committee on Indian Affairs.

21.12 Article I, section 3, of the Constitution gives the Senate power "to try all Impeachments" of civil officers of the United States after charges are brought by the House of Representatives. During its history the Senate has conducted some kind of official proceedings and rendered verdicts in the cases of 13 individuals—President Andrew Johnson; a former Secretary of War; a former United States Senator; and 10 Federal judges. A list of these individuals is given below: 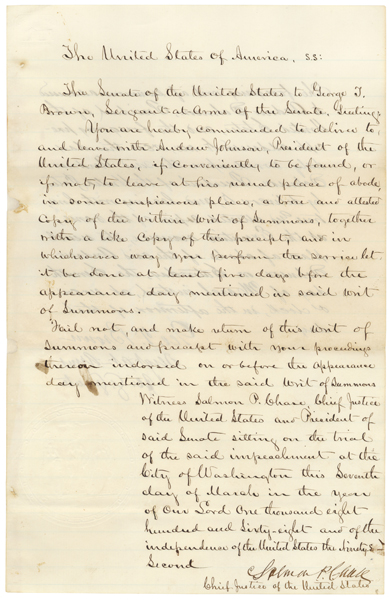 Writ of summons for the impeachment of President Andrew Johnson, dated March 7, 1868. RG 46, Records of the U.S. Senate, National Archives.

21.13 There is, therefore, a series of records of the U.S. Senate relating to impeachments, 1797-1987 (12 ft.). Records are present for all of the proceedings listed above, although many of them were published either as Congressional Serial Set documents or as parts of the Congressional Globe and Congressional Record.

21.14 Most of the Senate records of impeachment cases include journals of Senate proceedings during each session devoted to the charges. Other typical records include copies of the House resolutions announcing that body's action of impeachment to the Senate, the manuscript of the articles of impeachment, a response by the impeached official to the charges, letters and resolutions making arrangements for procedures to be observed, subpoenas for witnesses, and depositions. There are also exhibits appropriate for each case. For example, Samuel Chase was impeached ostensibly for improper conduct during a trial he had conducted; transcripts of that trial's proceedings are therefore found as impeachment exhibits.

21.15 As might be expected, the most voluminous records (3 ft.) are those of the trial of President Andrew Johnson in 1868. These records include all of the types mentioned above, as well as the original Senate ballot showing the failure to convict by one vote. Almost all of these records are available in printed form, in a number of House and Senate serial set documents for the 40th Congress, 2d session, and an entire volume of the Congressional Globe for the same period.

21.16 Senate records relating to the impeachment of William W. Belknap and later cases include additional, less formal documents and correspondence, but such records are likely to be more concerned with logistics and arrangements, or to express opinions as to the guilt or innocence of the official charged, than to have any information of importance not found in the published congressional documents.

Return to the Table of Contents for the Guide to the Records of the U.S. Senate