Accessing immigration records through the Freedom of Information Act (FOIA) does not have to be a confusing process. Join us on Thursday, August 30th from 10 a.m. to 12 p.m. EDT to learn from federal agency representatives about the kinds of immigration records their agency keeps and how you can use FOIA to request copies of these records. During this special forum, you will hear from representatives of:

Forum is presented by the Office of Government Information Services and U.S. Citizenship and Immigration Services.

10:00: Welcome by the Archivist of the United States

Jill Eggleston
Jill Eggleston is the Associate Center Director, FOIA/PA Branch, National Records Center, U.S. Citizenship and Immigration Services (USCIS). She oversees a staff of 175 access professionals and also serves as the USCIS FOIA Public Liaison. She oversees the largest FOIA Department within the Federal Government, averaging over 160,000 FOIA requests annually. Ms. Eggleston is an attorney with over 28 years of federal service, having served nearly 20 years with the Department of Defense (DOD) in the Office of General Counsel (OGC). Part of her responsibilities with DOD OGC included the review of FOIA requests filed with the Defense Finance and Accounting Service. During her time with USCIS she has been named DHS FOIA Officer of the Year for two consecutive years. She has successfully overseen multiple backlog reduction efforts, significantly increased outreach to USCIS customer and program office base, expanded the proactive disclosure program, implemented significant process improvements for USCIS and has piloted workforce initiatives such as quality workplace, expanded telework, and remote worker programs.

Matthew C. McNeil
Matt McNeil is currently a Supervisory Attorney Advisor and Chief of the Advisory Opinions Division at the U.S. Department of State. Mr. McNeil, an honors graduate from the Ohio State University’s College of Law, started with the U.S. Department of State in 2006 as a Foreign Service Officer. He joined the Department’s Visa Office in the Bureau of Consular Affairs where he has served as a Supervisory Attorney Advisor since 2015.

Sabrina Burroughs
Sabrina Burroughs is the FOIA Director for U.S. Customs and Border Protection (CBP).  She has been the Director of the CBP FOIA office since May 2013.  Prior to becoming the FOIA Director of CBP, she was the Director of Disclosure Policy and FOIA Program Development with the Department of Homeland Security Privacy Office.  Director Burroughs first gained her knowledge of FOIA while employed at the U.S. Secret Service Freedom of Information Branch.  She has worked in Government for over 28 years and of that she has spent 16 years in FOIA.

Ryan Stubbs
Ryan Stubbs has served as Associate Legal Advisor in the Government Information Law Division of the Office of the Principal Legal Advisor, Immigration and Customs Enforcement (ICE) since 2014.  In this capacity Mr. Stubbs is responsible for providing legal advice on all matters relating to the disclosure of agency information both within and outside the U.S. Department of Homeland Security. Mr. Stubbs is a subject matter expert on FOIA and has extensive experience handling all aspects of the FOIA, including intake, appeals, and litigation. Mr. Stubbs regularly provides FOIA training within the agency and works on a daily basis with the ICE FOIA Office.  Prior to joining ICE, Mr. Stubbs began his Federal career with the Department of Defense Office of the General Counsel, where he also handled complex FOIA issues and litigations.  He is a 2007 graduate of Hofstra University School of Law, and a member of the Kansas and District of Columbia Bars.

Mata Sebgoya
Mata Sebgoya is a Program Analyst in the Policy Division of the Office of Refugee Resettlement (ORR) at the U.S. Department of Health and Human Services (HHS). She began her work at HHS as an Intake Specialist in July 2011. In that role, Ms. Sebgoya prepared reports on the trends of referrals, discharges and bed capacity. She also acted as a liaison to the U.S. Department of Homeland Security and ORR care providers regarding initial placements. Ms. Sebgoya currently leads a team of four Records Specialists whose main task is to process Unaccompanied Alien Child (UAC) records requests. She assumed this role in 2015.

Joseph R. Schaaf
Joe Schaaf is a Supervisory Attorney-Advisor (FOIA)/Chief Counsel for Administrative Law in the Office of General Counsel (OGC), Executive Office for Immigration Review (EOIR), U.S. Department of Justice. Mr. Schaaf came to EOIR in 2016 after retiring from the U.S. Navy JAG Corps. A 1992 graduate of Duke University and Duke NROTC, he served aboard USS MOBILE before graduating from the University of Dayton School of Law in 1997 and reentering active duty as a Navy JAG. He served as a Trial Attorney and Staff Judge Advocate in Connecticut and as a Branch Head at the Administrative Law Division of the Office of the Judge Advocate General in Arlington, VA. In 2006 he deployed to the Mediterranean, Middle East/Persian Gulf and Far East as Staff Judge Advocate for Carrier Strike Group TWELVE.  He then served as Staff Judge Advocate at various commands in the Hampton Roads, VA area, including Navy Surface Forces Atlantic, Navy Reserve Forces Command, Navy Expeditionary Logistics Support Group, and Navy Expeditionary Combat Command, until retiring from the Navy in 2016. As Supervisory Attorney-Advisor for FOIA, Mr. Schaaf supervises the EOIR FOIA Service Center, which primarily processes requests for Records of Proceedings. The FOIA Service Center is staffed by six Government Information Specialists and 12 government contractors. Since 2017, Mr. Schaaf has also served as the Chief Counsel for Administrative Law, supervising the Ethics and Standards of Conduct Branch and handling general Administrative Law issues within OGC.

Patrick Connelly
Patrick Connelly is an Archivist with the National Archives at Philadelphia.  Mr. Connelly received a BA in History from West Chester University of Pennsylvania in 1995 and a MA in American History from Villanova University in 1999.  He previously served as Director, Research Services at the National Archives at New York City and as a Local Records Archivist at the Library of Virginia.  He has been employed by NARA for the past 18 years. 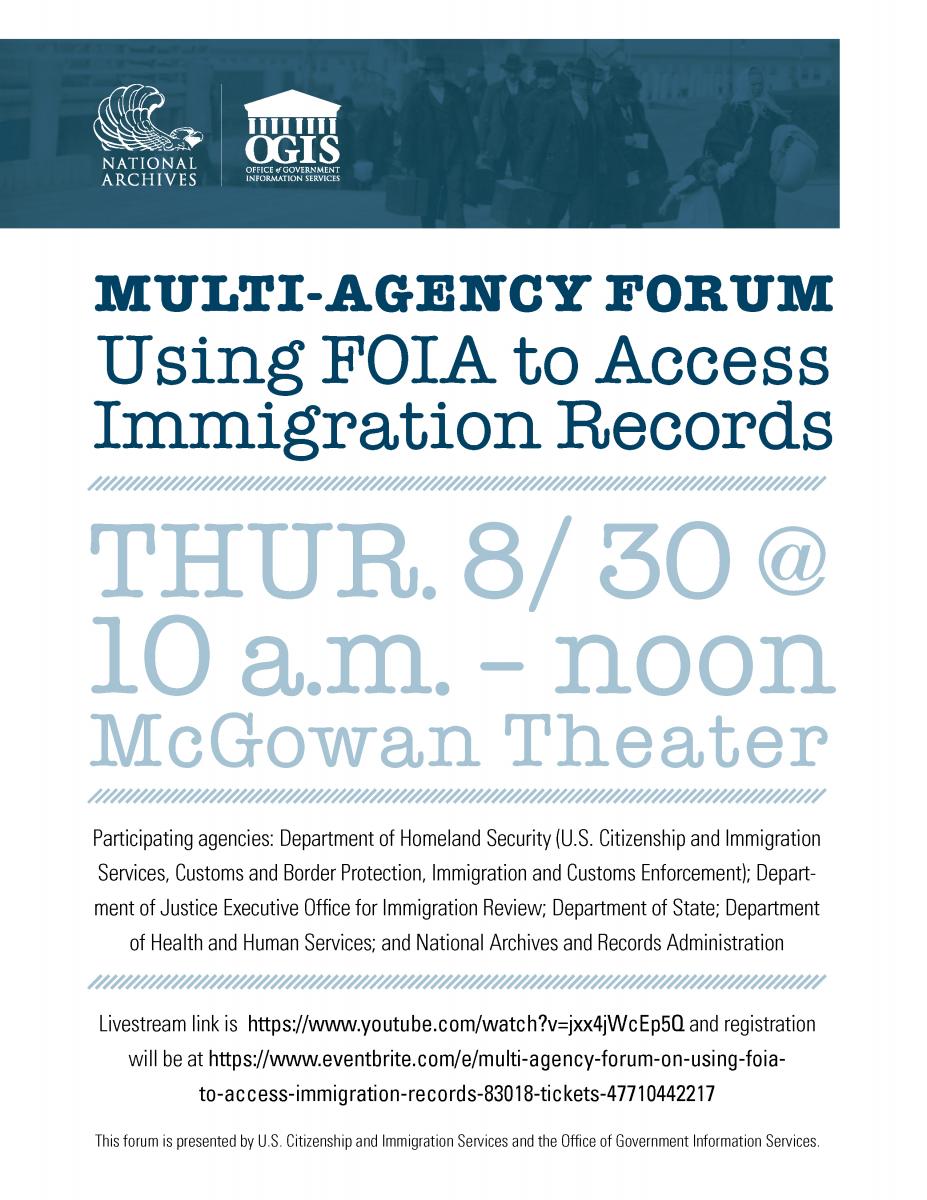