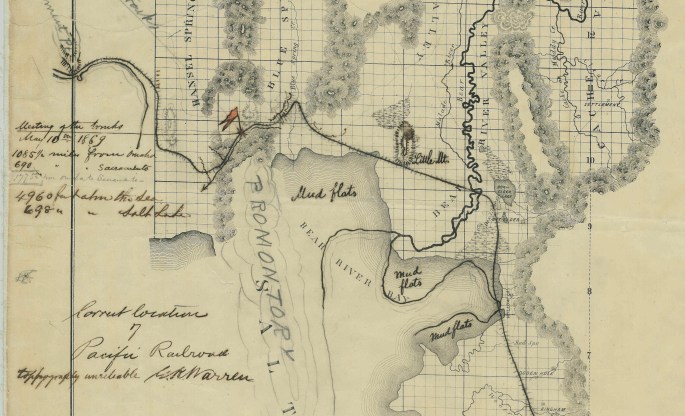 RG 49: Railroad Maps Related to the 1875 Act Granting to Railroads the Right-of-Way through the Public Lands of the United States, 1875-1930

This reference information paper describes records relating to railroads housed in the Cartographic Section of the National Archives at College Park, in College Park, Maryland. The records include cartographic records, architectural and engineering drawings, and aerial photographs relating to railroad equipment, tracks, and property. These records focus primarily on the United States, although there is widespread coverage of countries and regions worldwide. The dates of these records range from 1828 to 2009. Foreign coverage dates mostly from the early to mid 20th century. The records described include more than 215 series of records in 69 record groups.

The Federal Government has been linked to railroads since the first charters were issued in the United States during the 1810’s and 1820’s. Army surveyors from the Corps of Engineers were involved in the surveying and construction of the Baltimore and Ohio Railroad, the first operational railroad in the United States. Although no records remain of this work in the Cartographic Branch of the National Archives, many survey maps do remain of other early railroads. These include records created by the Corps of Engineers, Record Group 77, as part of internal improvements carried out by the Federal Government during the 1830’s.

The U.S. Postal Service quickly realized the potential of railroads and began using them to carry mail. In 1838, all railroads in the United States were declared postal routes. Records relating to the Post Office Department may be found in Record Group 28.

Following the conclusion of the internal improvement program, the Army continued to assist with the surveying of right-of-ways and bridge and tunnel construction throughout the ninetieth century. In 1850, The United States began issuing land grants directly to railroads in what would become known as the Public Land States. These transfers of public land to private hands helped to greatly increase the tax base of the country. The General Land Office, in the newly established Department of the Interior, was assigned the responsibility of supervising the railroads. Their duties included surveying public lands for potential railroad routes, administering land grant policy, and resolving issues involving right-of-way through public lands such as national parks and Indian lands. The records of the General Land Office, including right-of-way maps and railroad land grant maps, may be found in Record Group 49.

The Pacific Railway Act of 1862 - Surveys and Route Maps

With the coming of the second industrial revolution during the second half of the ninetieth century railroads underwent a rapid transformation and advancement in technology. These advances were lead by thousands of new inventions, from larger and more powerful steam engines, to improved track designs, to safer breaking systems, to more luxurious passenger cars and specialized freight cars. These inventions were documented through patent application files submitted to the Patent and Trade Mark Office (Record Group 241). The Cartographic Section maintains the patent drawings from these files for Utility Patents 1 to 1,000,000.

This series contains the most complete and detailed set of railroad maps held by the National Archives. Maps exist for nearly all of the major freight carrying railroads operating during the World War I time period, when total main line trackage reached its high-water mark of 254,000 miles.

The maps are arranged in our Catalog by the name of the railroad. To locate which railroad ran through a specific geographic area, consult this commercial atlas from 1914:

Once you determine the name of the railroad, you may narrow your search by determining the specific Valuation Section. These sections were assigned by the Interstate Commerce Commission during their valuation survey and can represent anywhere from one map to several hundred.  To find specific valuation sections, consult the system index map for each railroad. Locate your site on the system index, and find the associated valuation section number. For example, these are the system indexes for the Atchison, Topeka, and Santa Fe Railroad: https://catalog.archives.gov/id/160924508. In the second image, you can see that the section of line running from Dodge City to Coolidge is valuation section 32. There is often a more detailed index filed with each valuation section. You can use this section index to locate specific map sheets.

Individual maps are added to our Catalog as they are digitized on an ad hoc basis. If you do not find images of the Valuation Section or map sheet you are searching for you may visit our research room in College Park, Maryland or hire a private paid researcher to view and copy the maps. You can see a list of researchers specializing in our records here: https://www.archives.gov/research/hire-help/media.html?format=cartographic.

For more information on this series, see our blog post at: https://unwritten-record.blogs.archives.gov/2018/05/10/ive-been-working-on-the-railroad-and-you-can-too/

While still an isolationist country at the turn of the twentieth century, the United States was becoming increasingly involved in international politics and the global economy. Numerous military and civilian agencies operated foreign offices and compiled information on a plethora of subjects relating to foreign countries. Railroads were high on these lists as they often formed the core of a country’s economy and were quickly becoming an indispensable military asset. The United States Government was also becoming involved in projects and other activities on foreign soil. A large number of maps relating to foreign railroads may be found within the holdings of the Cartographic Branch. These include survey maps relating to the Intercontinental Railway Commission in South America (Record Group 43), maps of railroads constructed or studied by the Corps of Engineers (Record Group 77), and maps of railroads compiled for intelligence purposes by the War Department General and Special Staffs (Record Group 165).

Due to the military significance of railroads, the cartographic holdings of NARA are very rich during the time periods of America’s foreign and domestic wars. Railroad maps relating to the Civil War may be found among the records of the Office of the Chief of Engineers (Record Group 77) and the Adjutant General’s Office (Record Group 94). Maps of railroads used by General Pershing during the Mexican Punitive Operation may be found in Record Group 395. Maps showing railroad networks in Europe and the Middle East during World War I, as well as trench and other narrow gauge military railroads, may be found among the records of the American Expeditionary Forces (Record Group 120). Cartographic railroad records relating to World War II may be found in nearly a dozen record groups, including maps of rail networks in Europe (Record Group 331), intelligence maps produced by the Office of Strategic Services (Record Group 226), and aerial photographs showing railroads in major theaters of operation throughout the world (Record Group 373).

For a number of reasons, including government regulation, increased competition, legal and labor issues, and financial losses stemming from maintenance obligations, railroads suffered greatly during the Great Depression and the post-war years of the mid to late twentieth century. These hard times are documented through maps relating to railroad mergers and consolidation. Maps relating to consolidation studies created by the Reconstruction Finance Corporation during the 1930’s are located in Record Group 234. Conrail property transfer maps created to document land transfers authorized by the Regional Rail Reorganization Act of 1973 may be found in Record Group 21.