The Freedom of Information Act (FOIA) & Classified Records at a Glance

Exemption 1 of FOIA exempts from release records that are “(A) specifically authorized under criteria established by an Executive order to be kept secret in the interest of national defense or foreign policy and (B) are in fact properly classified pursuant to such Executive order,” 5 U.S.C. § 552(b)(1), effective July 4, 1967. Records are generally deemed classified when their release may harm national security. 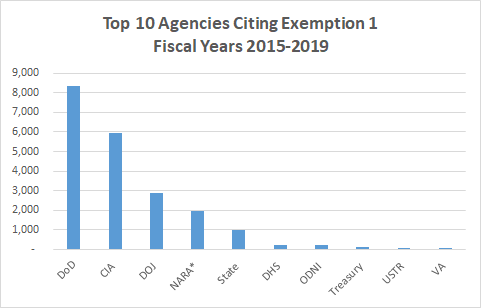 * NARA does not have original classification authority

Agencies prefer that requesters seeking access to classified records file a FOIA request or a Mandatory Declassification Review (MDR) request. The differences are broadly outlined below.

Who’s Who at the National Archives and Records  Administration (NARA)

National Declassification Center (NDC): administers FOIA and MDR requests for NARA’s classified accessioned (historical) holdings. Streamlines declassification processes; facilitates quality assurance measures; and implements standardized training regarding declassification of records determined to have historical permanent value.  NDC’s motto is “Releasing What We Can, Protecting What We Must.” Established on December 30, 2009, by Archivist David S. Ferriero in accordance with E.O. 13526.

Public Interest Declassification Board (PIDB): although not part of NARA, the ISOO Director is Executive Director of PIDB, which is also staffed by ISOO. Nine members, five appointed by the President, and one each by the Speaker and Minority Leader of the U.S. House, and the Majority and Minority Leaders of the U.S. Senate. Advises and provides recommendations to the President and other executive branch officials on the systemic, coordinated, and comprehensive identification, collection, review for declassification regarding issues pertaining to national classification and declassification policy. Established by Congress in 2000, the PIDB first met in 2005.